Proud supporter of local charities
through our donated truck wraps

DOWNLOAD FREE GUIDE
TO AIR CLEANERS IN THE HOME

Submit your email below to get the guide delivered to your email.

ACCA (Air Conditioning Contractors of America) have a new website feature helps contractors and Consumers Find Energy Efficiency Incentives – this wonderful page is worth a look here is the link:  https://www.acca.org/consumer/dsire

Updated 2/29/12:   There is a bill circulating the Senate that, if passed, will create tax credits for consumers that reduce their energy usage by at least 20%. The bill establishes a $2,000 base credit for the first 20% decrease with a $500 stepend for each 5% reduction thereafter. The credit will be capped at $5,000 or 30% of the qualified expenditures, whichever is the lesser amount.
Experts have estimated that this bill will create about 19,000 jobs through contracting, supply, and manufacturing while saving 1.7 billion kilowatthours and 18 trillion Btu of fuel by 2016. This is enough energy to power 375,000 homes!
No one is sure if Congress will pass the bill as it does not identify where the funding will come from, but the fact that energy saving bills are still being considered in Congress is a good sign. This shows that the national mindset toward energy efficiency is changing, becoming more important to the everyday consumer. End of 2/29/12 update.

(except boilers and oil furnaces)

BUT the Dollar Figures are Different

The “Tax Relief, Unemployment Insurance Reauthorization, and Job Creation Act of 2010” includes a one year extension – with revisions – to the federal tax credits on qualifying high-efficiency HVAC equipment.

The new law will extend a number expired and expiring tax cuts and other incentives for individuals, families, small businesses, and investors.

Included in the new law are the Section 25c tax credits, the official name for the energy tax credits available to eligible taxpayers who make qualified energy efficient retrofits to their homes. The tax credits are extended through 2011, but at a significantly reduced value and with changes made to some of the qualifying equipment standards.

Starting on January 1, 2011 and through December 31, 2011, an eligible homeowner can claim 10% of the costs, capped at $500, for the installation of qualified energy efficient improvements, subject to certain limits.

Under the new law, for HVAC and hot water equipment, the maximum a homeowner could claim is $300 for a qualified central air conditioner and heat pump, and $150 for a qualified furnace or hot water boiler, and $50 for any advanced main air circulating fan. The tax credit for qualified hot water heaters is limited to $300.

Finally, the new law reinstates the lifetime credit caps, which disqualify any homeowner who has claimed more than $500 in 25c tax credits since January 1, 2005, from any further credits.

While the extension of the tax credits at a lower value is not ideal, it keeps the tax credits alive and leaves open the opportunity to change them in the next Congress and restore them to the $1,500 level. If the tax credits had not been included in the extender package, they would likely have disappeared forever.

Aside from the energy efficiency tax credits, the new tax law includes in an extension of the Bush tax cuts and other expiring incentives, avoiding a massive tax hike on individual tax rates, the estate tax, capital gains and dividends, and other important tax provisions for the small businesses of the HVACR industry.

The following provisions of the new tax law are of most interest to small businesses.

This is significant for small businesses that operate as “pass through” entities (sole proprietors, partners or S Corporation shareholders) and, as a result, pay taxes on their business income on the individual rate schedule.

The patch enacted for 2010 allows for nonrefundable personal tax credits, like the 25c tax credit, to be claimed against the AMT.

Under current law, couples have to do complicated estate planning to claim their entire exemption (currently $7 million for a couple). The new law allows the executor of a deceased spouse’s estate to transfer any unused exemption to the surviving spouse without such planning. The new law is effective for estates of decedents dying after December 31, 2010.

Prior to the Bush tax cuts, the estate and gift taxes were unified, creating a single graduated rate schedule for both. That single lifetime exemption could be used for gifts and/or bequests. The Bush tax cuts decoupled these systems. The new tax law reunifies the estate and gift taxes. The proposal is effective for gifts made after December 31, 2010.

Temporary Extension and Modification of section 179 Expensing Allowances
Section 179 of the tax code gives small business taxpayers the option to deduct from their taxes, or “expense,” the cost of purchases, up to specified limits, in the year items are acquired, rather than recovering the costs of the items over time through depreciation. Current law also establishes a “phaseout threshold,” and if businesses place more than that specified amount of property into service in a year, then the amount that they are permitted to expense is reduced dollar for dollar, but not below zero.

The new law allows businesses to expense 100% of the cost of qualified property placed in service after Sept. 8, 2010, and before Jan. 1, 2012. It provides for a 50% first-year additional depreciation deduction for qualified property placed in service in 2012. The measure sets threshold limits for 2012 at $125,000 per year, with a phase-out for capital expenditures exceeding $500,000. It also allows businesses to elect to accelerate the AMT or research credit in lieu of additional first-year depreciation, through 2012. In addition, the measure extends the treatment of off-the-shelf computer software as qualifying property.

Exclusion of small business capital gains
The new tax law extends the 100 percent exclusion of the gain from the sale of qualifying small business stock that is acquired before January 1, 2012 and held for more than five years 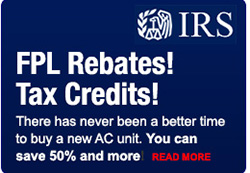 Customer Review “They were able to come out quickly, diagnose the problem and fix it.” – Dr. Melissa Newman

We are committed to protecting your privacy. The information you enter on our site is held in confidence between you and us. We do not sell, trade, or rent your personal information to others. This privacy statement discloses how the information you provide is used and protected. To read our entire Privacy Statement click here